Why Rent to Own Homes Outperform SFRs in Current Market

The Dream America Fund offers single family lease to own homes in major metro areas of FL, GA and TX. Dream America's CEO and Founder, Chris Innes, is going to talk about how their unique rent-to-own strategy offers investors high yield, low duration and a hedge for inflation while helping front-line workers, Veterans and others on the path to the American Dream of homeownership. Dream America offers: 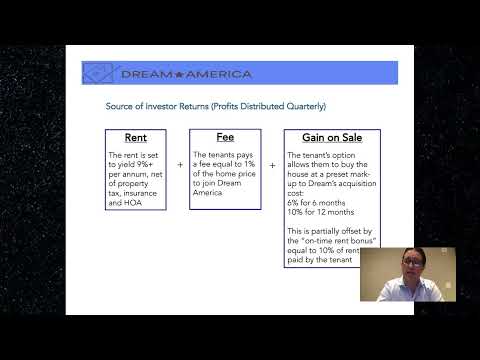 Why Rent to Own Homes Outperform SFRs in Current Market

Dream America LLC offers rental homes to clients who want to buy a home but need additional time to qualify for an FHA or VA mortgage due to divorce, medical issues or other factors. Dream America allows approved clients to pick any house listed for sale. Dream then buys the home and rents it back to the client until they are mortgage-ready. And to help them on their journey, Dream credits 10% of rents paid towards their purchase. The company launched in 2018 and currently operates in major metro areas of Florida, Georgia and Texas.

Let’s grow our businesses together